Go Directly To Rewards
Welcome to the PledgeManager for THE NICODEMUS JOB and also Doctor Dinosaur wrote a book :(!
If you missed our campaign, don't dismay! Just choose an option below.

We’re Brian Clevinger and Scott Wegener and we’re the creators of Atomic Robo, an online comic about the adventures of a robot who is also a scientist. Each volume is a self-contained story about the incredible life of Atomic Robo.

We also make a spin-off series called Real Science Adventures where we work with other artists to showcase the rest of Robo’s world. Check it out! Today we’d like to Kickstart the fancy hardcover edition of our newest book, Real Science Adventures: The Nicodemus Job. This stunning collection was drawn by Meredith McClaren, colored by J.N. Wiedle (Chapter One) and Shan Murphy (Chapters Two through Five), lettered by Tess Stone, edited by Lee Black, written by Brian Clevinger, with layout/design by Eric Trautmann.

Oh and uh also Doctor Dinosaur wrote a book and we’re contractually obligated to help him promote it. But our promotion doesn’t have to be polite. So, it’s called Doctor Dinosaur’s Time Travel Through the Back Door, and it’s terrible. Just, seriously, a big stupid mess of a book.

The Nicodemus Job is the story of the greatest heist of the 11th century! This is our deepest dive into the history of Atomic Robo’s world. We’ve got a crew of thieves, con artists, and bums (well, one bum).

And they’re up against one of the most powerful men in the city using his political power to rob from the rich and give to, well, himself. Our heroes have to break into a vault that’s built like a fortress and guarded by an army on the inside and another army on the outside, and then they’ve got to get back out again without anyone noticing.

But that's not all. Sadly.

Doctor Dinosaur’s Time Travel Through the Back Door is just stupid. It’s filled with advice the same way a bag of angry scorpions is filled with friends.

Stranger still, there are these bizarre (and rambling) excerpts from his bestselling autobiography, I’ve Been Everywhen, Man which, it must be said, does not currently exist in our timeline. I think these passages are included just to pad out the page count? Even if we assume any of them are true (they’re not) none of them make sense regardless. I mean, people would notice a talking dinosaur running around!

We’re going to make a fancy hardcover edition of The Nicodemus Job. This will collect all five chapters of the story and include bonus features like in-universe documents, a cover gallery, notes from the creators, and more!

We’re also going to make two versions of Doctor Dinosaur’s Moronic Time Travel Thing so he’ll shut up about it. One is softcover, one is hardcover, and both are bad. These will include, oh lord, I don’t know what. He’s going to put some graphs in there. Good luck with them. He thinks he can write haiku so look forward to that I guess?

We have Add-ons for every budget. Everything from purely digital goodies to several flavors of original art.

The Hardcover — The complete story of The Nicodemus Job by McClaren, Wiedle, Murphy, Stone, Lee, and Clevinger with cover gallery, alt cover gallery, concept art, additional documents and speculation about the heist, and an introduction by John Rogers, the creator of LEVERAGE.

Dino Time Thing — Doctor Dinosaur says there will be two versions of this. One is for “Stupid dumb babies” which I assume means the softcover edition. The other is “Super Deluxcelsior” so that’s probably the hardcover? Honestly it could go either way with these names.

Print Set — A collection of all new prints. The higher our goal, the more you get!

Dino Fun Time Sticker Sheet — Doctor Dinosaur is jerk but other dinosaurs are still cool. And so are stickers! So we smashed them together into one item.

Signed Bookplates — You slap these on the inside your book and by the transitive property you got a signed book! 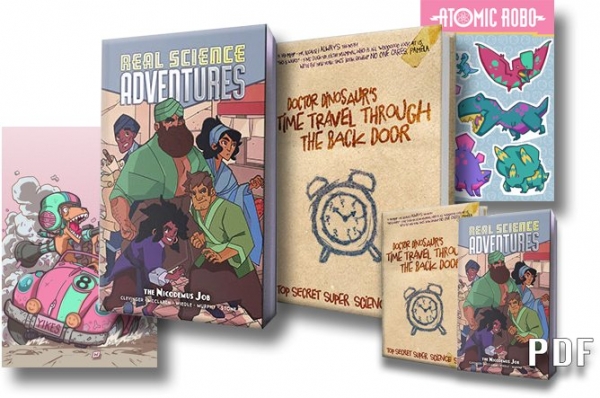 In addition to hardcover edition of The Nicodemus Job now you're getting a physical copy of Doctor Dinosaur's Time Travel Guide full of useful information and facts that are, oh man, so real. You also get signed bookplates for both books, a fun dino themed sticker sheet, and your name emblazoned upon our fancy "Thank You" page so future generations blah blah blah. 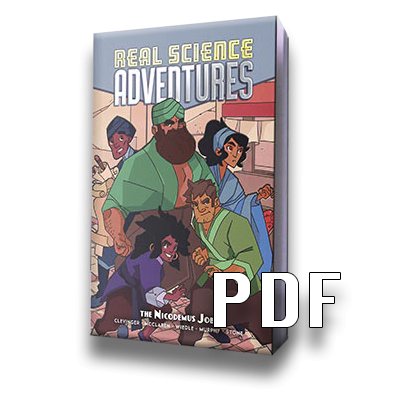 Digital rewards. Well, reward. Singular. It's a PDF of The Nicodemus Job. We'll take some of your money and then you can have it. 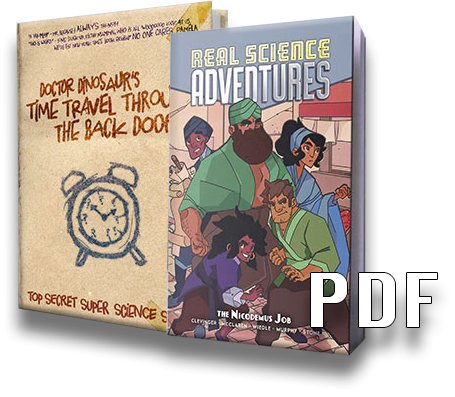 You want digital rewards, we got 'em! And these are them. These are those? Those are them! They are these? Uh. Just, look, you're getting PDFs for both books. 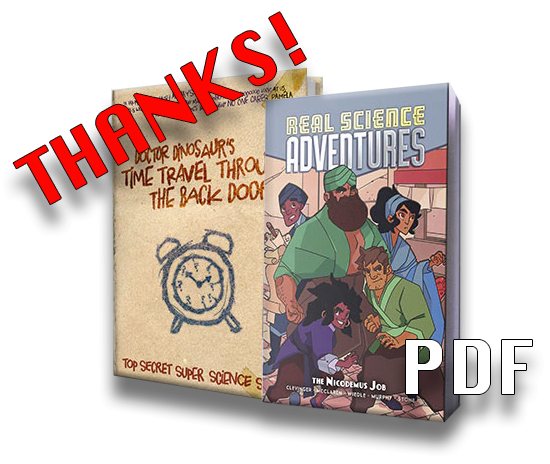 For those of you who only want digital rewards but also want your name to be enshrined forever in our Thank You page so that future generations know you were there buying Atomic Robo spin-off merchandise while the world burned. 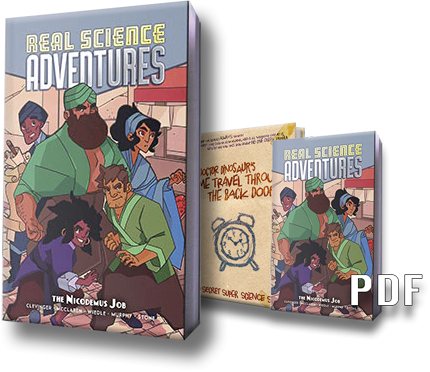 The Nicodemus Job is the greatest heist of the 11th century. There's a crew, a mark, like three cons happening at once, you'll love it. This is a fancy hardcover edition of that story including all-new bonus material. We'll throw in the PDF versions of both this volume and Doctor Dinosaur's Time Travel Guide for free so you think you're getting a deal.

One last step to go!

Share your email, we will send you an invite!

If you're already have a PledgeManager account from another project, just sign in using the button below to join the project.

Complete your information below and we will send you an email to get started!